Ballhockeygear.ca to be at East Coast Play On! tournaments

That's right! We have officially partnered with Play On! and we will be showing off our gear at the East Coast tournaments. We would have loved to do all the tournaments, however, due to time constraints, we have chosen to do our first year in the East Coast. 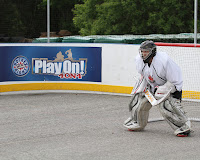 Play On! was actually one of the main inspirations to starting Ballhockeygear.ca (BHG). BHG was originally a club called Capital Sports Club that provided a league for pick up Ball Hockey. We put in a team in Ottawa in 2014 as Capital Sports Club which was made up of players from the club. We understood very well the pain to finding quality Ball Hockey equipment. At first it was from the talks in the change rooms from players looking for gear. Then when we were at Play On! we were surprised to see no booths selling Ball Hockey gear.

In July 2014, we launched Ballhockeygear.ca to provide players a central hub where they can find all the quality Ball Hockey gear they needed. When launching, one of our main goals was to someday partner with Play On!. Today marks that day!

To some, it may seem obvious. Play On! is the largest street hockey festival in Canada with thousands of participants. That is not the main reason though. Play On! shares the same passion as we do. They love the sport. They want to help make it grow and bring attention to our sport in our communities. They are no business tycoon that is trying to take our money. They are hard working individuals making sure we have the greatest experience in one of the best Street Hockey tournaments in the world. They are in it for us.

Is your Team in?

The answer should be yes! Get some players lined up. Register on their site at www.playon.ca. If you're looking for a team to join, post on their Facebook page by clicking HERE. You can also check for your local Play On! Facebook pages. This tournament is truly an experience to be had and this is coming from a guy who's been in it since 2011 and will for sure be playing this year.

BHG will be at following the tournaments on the East Coast:

Toronto, ON
June 4th to 5th

Up until the 28th of May, we will be offering a promo code where you can receive 10% OFF Shin Pads, Replacement Blades, BladeTape, and the new Knapper Ball Hockey sticks.