The teams are now past the halfway point of their season with Brock leading the pack with 20 Points, Carleton is second with 14 points, McMaster is not too far behind with 9 Points and Waterloo trailing with 7 Points. At the end of the season, each team will be seeded for playoffs which are set up in a tournament style called the Ontario Intercollegiate Ball Hockey Championships (OIBHC). 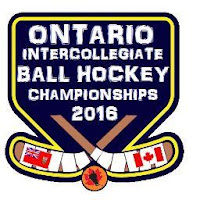 The 2016 OIBHC will be held in Vaughan, Ontario from March 18th - March 20th where these 4 teams will be battling for the Championship title and a free entry into the OBHF Provincials.

The 4 teams will be not being doing the traditional round robin format this year. Instead it will be a double elimination series.

The Schedule is TBD.


Ballhockeygear.ca are proud sponsors of the OUBHL and will be tweeting the action live through their Twitter and Facebook accounts. Ballhockeygear.ca owner, Riel Ouimet, will also be at the event as Head Coach for the Carleton Ravens.

The OUBHL is planning to expand with new teams in the 2016-2017. In the market is Ottawa University, Wilfred Laurier University, and University of Western Ontario however no team Captains have been named yet so nothing has been confirmed.

If you would like to see your school in the next season, you can contact the league by email at ouballhockey@gmail.com.